The small and predominantly Buddhist nation of Bhutan, tucked between China and India, is lanced by deep ravines and coated with thick woods. The country has no traffic lights. Smoking as well as tobacco products are illegal, as are hunting and fishing (except for catch and release). It is forbidden to climb high peaks (where spirits dwell), and employees must wear traditional clothing—a gho robe for men and kira dress for women—during work hours. Years ago, Gross National Happiness was identified by the nation as being more important than Gross National Product (GNP). 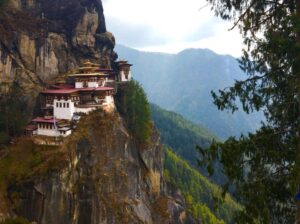 Monasteries—often massive and commanding—abound; monks, when not in prayer or meditation or chores are often found playing board games, sharing stories, laughing or all three. Archery is the national sport and green chili peppers together with ‘cheesy sauce’ is the national dish. Ask any resident, and likely you’ll find they truly do love their king and queen.

This country—with an area of 14,824 square miles (38,394 square kilometers) is slightly larger than the U.S. state of Maryland, or the European state of Montenegro. This sounds relatively small until you spend hours crossing thin and switch backed roads through jungles and over mountain passes. Suddenly the land appears gigantic. Seventy percent of the terrain is coated with forests, while seven percent is pressed beneath glaciers. The highest Himalayan peak—Gangkhar Puensum—soars to almost 25,000 feet (7,570 meters) above sea level. That’s higher than any peak in Europe, Africa, the Americas or Australasia.

Bhutan’s projected population for this year is about 790,000 people—or about 10% more than the city of Seattle in Washington State, or roughly the same as that of Nottingham in the U.K.

Between 2012 and 2016, the number of annual visitors increased 24%—up to 54,600. That is about the seating capacity of Yankee Stadium in New York, or the number who visit Notre Dame Cathedral in Paris every two days. American visitors are increasing, while the number of arriving Europeans remains steady. The influx of Asians is booming. The number of Chinese has more than doubled in the past six years, and the influx is ramping up for those from Vietnam, Indonesia, Singapore and South Korea—mostly during May and October. As visitors increase, favored visiting spots such as the trail ascending toward the Tiger’s Nest Monastery are becoming more crowded—both with people and the ponies that ferry many.

Much else has changed during the past four years. There are more hotels, coffee outlets and souvenir stores in the cities, though the emerging urban sprawl of Thimphu lacks adequate parking. Phallus paintings and carvings, once ubiquitous on virtually every Bhutanese building, have vanished in most urban centers. These represent not only fertility and shameless acceptance, but the legend of a national hero who subdued a bewitching mountain hag with his physical prowess.

Copied From Forbes and Posted on Pak Press on Saturday, August 28, 2021