Beijing’s preeminent concern is unrest in neighboring Afghanistan could have a detrimental impact on its economic interests in the region: 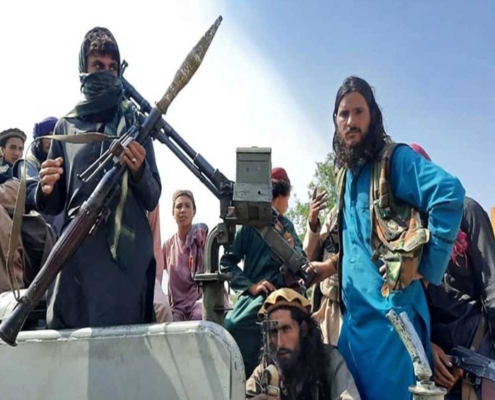 In July, Taliban representatives met Wang Yi, China’s foreign minister, in the Northern Chinese City of Tianjin. This meeting, the most public and high-level between the two sides so far, seemed to show that Beijing was increasing its role in Afghanistan. Indeed, it has been suggested that China is planning to capitalize on the US withdrawal by flooding Afghanistan with investment and expanding its influence there.

But this is unlikely. For Beijing, Afghanistan is a problem to manage, not an opportunity to exploit. Far from relishing the NATO pullout, China is concerned by the prospect of heightened instability on its doorstep. While long uncomfortable with the presence of US troops nearby, Beijing is clearly unhappy with the pace of America’s departure, repeatedly criticizing Washington’s “hasty withdrawal”.

And well it might be. China has little to gain, and potentially much to lose, from a chaotic Afghanistan. Substantial investment is all but impossible in a poor, war torn country with minimal infrastructure, desperately low levels of human development, and an uncertain political future. China’s immediate concern will be working to improve the security situation and suppress any militant threats.

Violence is rising dramatically as the US completes its withdrawal. The Taliban has launched a lightning offensive, seizing multiple provincial centers in the last week alone, including the capital of Badakhshan on China’s border.

“After witnessing the quagmire [the] US got into in the past twenty years, China’s near-term strategy will be about how to prevent the spillover effect of the potential security crisis in the country,” said Yun Sun, director of the China Program at the Stimson Center.

China’s economic engagement with Afghanistan is limited: it trades more with Pakistan and the Central Asian states. “Overall, China’s economic investments in Afghanistan remain small and well below their potential,” according to a 2020 report by the Brookings Institution.

The “immense insecurity” in Afghanistan is “not conducive to any investment”, said Vanda Felbab-Brown, director of the Initiative on Non-State Armed Actors at the Brookings Institution and author of the report.

The country is not part of the Belt and Road Initiative (BRI), which bypasses Afghanistan and moves through neighboring countries. A 2016 Memorandum of Understanding (MoU) of BRI cooperation and a small pledge of funding from Beijing went nowhere.

Moreover, the BRI has been slowing worldwide as China confronts the coronavirus pandemic and other problems. Levels of investment are falling, making it even less likely that Beijing would pump money into a high-risk conflict environment.

While, in theory, Afghanistan could serve as a land bridge between regions, the security situation has prohibited the construction of transport routes across the country and violence is now escalating, reducing the feasibility of such projects further still.

China has a very short, almost impassable land border in Afghanistan’s eastern Wakhan Corridor, and the government is reportedly building a road that could eventually reach the frontier and, according to media reports, enable the country’s integration into the BRI.

But Beijing likely does not want a cross-border trade route that could ease militant infiltration, according to Afghanistan-based journalist Franz J Marty. A former Chinese ambassador said that a route to China through Wakhan was “not an attractive option”.

Moreover, Beijing has ordered Chinese citizens to evacuate from Afghanistan, hardly a sign of an impending investment bonanza. “It is hard to imagine how China will ‘fill the vacuum’ with its people gone,” Yun Sun told TRT World.

The story of Adnan Sarwar, a Pakistani-born British pilot who overthrew Saddam Hussein – in his own words

Article 19 and Threat To Media